Underfloor heating is an increasingly popular option today since it helps to keep your feet warm and can be used as another heat source. Underfloor heating can be placed in any room in your home or throughout the whole house. When we handle the installation, the highest-quality materials will be used to make sure the flooring will last. We choose high-quality materials for the piping or cables and the levelling cement.

Our installers can put the underfloor heating system under most floor finishes. These systems work great under wood flooring, carpeting, laminate flooring, vinyl, and stone or tile floors. Our professionals are accredited, so they can make sure the system is installed safely and correctly no matter what type of flooring will be above it.

If you're looking for a better way to keep warm, underfloor heating may be an excellent option. We can handle electric or wet installations, as well as help you decide which one is right for your home. Contact us today to learn more or to get a quote for an underfloor heating system.

Get your free Quote below, or click here to call us

Everyone and Their Dog Loves Underfloor Heating

There's no doubt at all that it's much easier to install a wet Underfloor Heating system if it's a New Extension or New Build as there are no existing floors to rip up. That's not to say it's not possible; it'll just take a wee bit more time, money and effort. However, the benefits of underfloor heating will be there long after the pain of installation has worn off.

There is also the option of using a dry/electric Underfloor Heating system. It's certainly easier to install, a bit cheaper, less work to be done underneath, but there can be a difference in running costs.

We can always advise on the best method to go for.

In general existing smaller rooms or existing rooms that are only occasionally used could be natural choices for the dry system as the running and installation costs would balance out.

It would be best if you also considered whether simply adding radiators would solve the problem. We know we are talking ourselves out of a job here, but sometimes it makes sense to go traditional.

You, too, can be as comfortable as the dog. As long as you don't mind lying on the floor.... 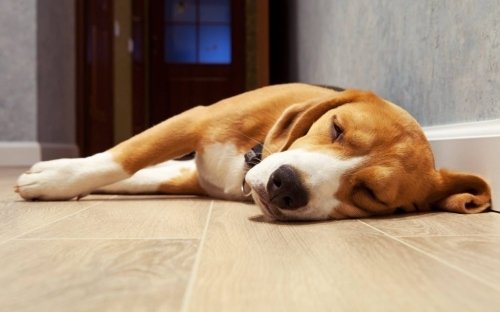 Ready for a new Tiling Experience?